Transport and information and communication technology (ICT) projects financed by the African Development Bank (AfDB) in 2016 would have a positive impact on the living conditions of close to 20 million Africans over the next few years. The AfDB made this forecast in the Annual Report of the Infrastructure, Cities and Sustainable Development Department, published on 9 June 2017.

The report cites 1.6 billion US dollars as the total amount of loans and grants provided by the Bank in transport and ICT in 2016. This amount is allocated to 15 countries to finance a wide range of projects such as international roads systems, railway lines, urban infrastructure and projects related to new information and communication technologies.

With these new projects, the global portfolio of transport and ICT projects under implementation rose to 118 in 47 countries, cumulatively valued at 11.8 billion US dollars.

“Transport and ICT play a pivotal role in the pursuit of the Bank’s five operational priorities, particularly in supporting industrialisation, regional integration, agricultural modernisation and for the overall improvement of the living conditions of Africans,” explained Amadou Oumarou, Director of the Bank’s Infrastructure, Cities and Sustainable Development Department. 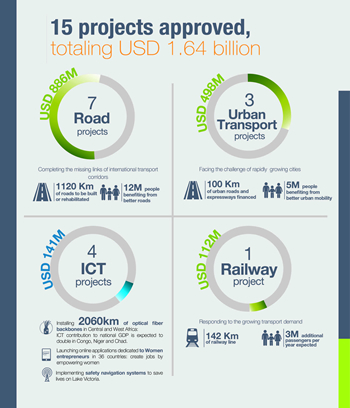 The report features the various projects using infographics and maps to help explain how each project is integrated into its specific geographic and economic context. For example, the Mueda-Negoman road opened the first paved link between Mozambique and Tanzania, and will connect with other roads financed by the AfDB in the region. The Trans-Saharan fibre optic backbone will connect Chad and Niger with their neighbours, strengthening internet access in particularly remote areas. The report explains how the projects being financed contribute to regional integration across the continent. This year, the approved projects will finance the paving 1120 km of roads and laying 2060 km of fibre optic cable.

The document also describes the Bank’s holistic approach: the financing of each infrastructure project is accompanied by measures designed to stimulate economic activity and improve the wellbeing of the people in the project areas. A road project connecting Rwanda and Uganda includes launching a training program for 1,600 women who make their living through cross-border trade, the construction of two markets near the border crossing and support to seven local associations. Also of note are projects to provide better access to isolated areas of Cameroon and southern Ethiopia, accompanied by strong support for agricultural development and construction of health and education infrastructure.

In 2016, the Bank’s role has evolved in such a way as to emphasise urban mobility and the development of sustainable cities. The report cites the creation of a “Cities and Urban Development” division, which will assist the Bank in tackling challenges posed by the continent’s rapid urbanisation. The past year was marked by significant infrastructure projects in Abidjan, Accra and Kampala, amounting to over 500 million dollars, an unprecedented Bank investment in the urban transport sector.

Finally, the projects being financed reflects how the Bank accompanies its partners and clients, especially in capacity building. The 2016 operations include the training of 250 local staff and administrative managers. In the long-term, the Bank is committed to finance the elaboration of local, national and multinational infrastructure development strategies. These would include the establishment of an urban development plan for Accra; creation of an agency dedicated to coastal protection in Togo; design of a development plan for Lake Victoria involving three neighbouring countries, and coordinating preliminary studies for the construction of a highway corridor between Abidjan and Lagos connecting five countries. In doing so, the Bank will strengthen the level of expertise and coordination of its member states’ administrations thereby opening the way for future development projects.

Call for Applications: “Hacking the SDG’s” – Impact Hub Lagos Invites you to Apply for The 2021 Virtual UNDP SDG Hackathon