Developing Africa’s “grey matter infrastructure” through multi-sector investments in nutrition in Africa was a key focus Monday at the African Development Bank’s Annual Meetings in India.

Building on the AfDB President Adesina’s strong commitment to unlock sustainable economic growth, participants agreed that investing in physical infrastructure cannot help Africa to move forward without building brainpower. Speaking at a side event on “Developing Africa’s Grey Matter Infrastructure: Addressing Africa’s Nutrition Challenges” for healthy children, families, and economies, they highlighted the importance and urgency of fighting the scourge of malnutrition on the African continent. The event also established a foundation for further high-level dialogue and leadership to end malnutrition for health and prosperity for Africans and Africa on the whole.

Malnutrition – the cause of half of child deaths worldwide – continues to rob generations of Africans of the chance to grow to their full physical and cognitive potential, hugely impacting not only health outcomes, but also economic development in Africa. Malnutrition is unacceptably high on the continent, with 58 million or 36% of children under the age of five chronically undernourished (suffering from stunting), and 13 million or 8.5% of children acutely undernourished (suffering from wasting). In some countries, as many as one out of every two children suffer from stunting. The effects of stunting are irreversible, impacting the ability of children’s bodies and brains to grow to their full potential. This is often linked to vulnerability to illness, difficulty in school, and ultimately reduced adult labour capacity. The impact of this weakened labour force, and worsened health outcomes for entire generations of children, has dire consequences for a country’s economic development. Ultimately, stunting feeds the cycle of poverty.

Assisting African Governments to build strong and robust economies is accordingly a key priority for the AfDB. Recognizing the potential that exists in the continent’s vast human capital, President Adesina included nutrition as a focus area under the Bank’s five operational priorities – the High 5s.

For Jennifer Blanke, AfDB Vice-President, Agriculture, Human and Social Development, “malnutrition is a major global public health concern whether it is from undernutrition, overweight/obesity or micronutrient deficiencies.” She also mentioned that ensuring good nutrition requires a multi-sector, collaborative approach and that the agriculture sector, among others, has a role to play in influencing nutrition outcomes.

During the debate, the panelists agreed that there is a direct link between productivity and growth of the agriculture sector and improved nutrition. “It has become evident that it is the quality of food and not the quantity thereof that is more important,” said Baffour Agyeman representing the John Kuffuor Foundation.

Emphasis was also placed on the African Leaders for Nutrition (ALN), an initiative bringing together Heads of State committed to ending malnutrition in their countries that was launched collectively by President Adesina and President John Kufuor at the Bank’s Annual Meetings in 2016. The ALN endeavours to use its high-level membership to drive increased visibility of nutrition on the continent, strengthen political will, increase national-level prioritization, and encourage specific policy and financial commitments to nutrition.

Commenting on the role of ALN in encouraging investments in nutrition, Shawn Baker, Nutrition Director at the Bill and Melinda Gates Foundation, said, “ALN is a way to make the fight against malnutrition a central development issue that Ministers of Finance and Heads of State take seriously and hold all sectors accountable for.”

Drawing also from significant audience participation, there was agreement in the room that nutrition is vital for human capital and economic development. The Bank is developing a Multisectoral Nutrition Action Plan, which will focus on ensuring that a well thought out results-oriented plan that recognizes the cross-cutting nature of nutrition solutions can be instrumental for better nutrition in Africa. As Africa’s premier development Bank, the AfDB plans to leverage leadership of African Heads of States, Ministers of Finance, and other key stakeholders in government and civil society to garner the necessary support to increase investments in nutrition and grey matter infrastructure. Muhammad Ali Pate, CEO of Big Win Philanthropy, foresees the African Development Bank to play a critical role in this regard.

Discussions highlighted the large financial impact malnutrition currently exacts, given Africa loses approximately US $25 billion per year, with a loss to individual countries of between 3% and 16% of their annual GDP. On the contrary, every dollar invested in nutrition has the potential to return $35 in health and economic benefits.

For Laura Landis of the World Food Programme, the cost of inaction is dramatic. “We have to make an economic argument on why we need action,” she said. “The WFP is helping, in cooperation with the African Union and the AfDB, to collect the data that gets not just the Health Minister moving, but also Heads of State or Ministers of Finance.”

This is particularly true for fragile states, said Sierra Leone’s Finance and Economic Development Minister Momodu Kargbo. “Cooperation and coordination are key between government and development partners,” he said. “Development partners disregard government systems when implementing programs whereas they should align and carefully regard existing government institutions and ways of working,” he lamented.

The panel concluded that the debate was necessary to ensure that all stakeholders are driven by results to ensure better nutrition aiming at “Improving the quality of life for the people of Africa”, the “High 5” of President Adesina’s vision. The discussions focused on the key political and leadership role that can encourage investments in agriculture and nutrition, resource mobilization and the dire situation of some of the African countries that are on the brink of famine. The meeting concluded that the Bank’s leadership role in promoting Grey Matter Infrastructure Development in Africa is a game-changer, providing a much needed venue to convene key stakeholders to bring an end to malnutrition on the continent. 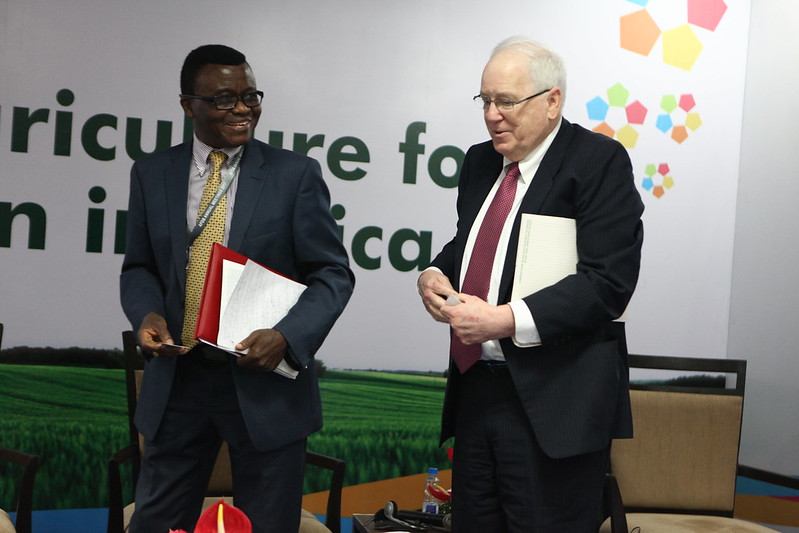