Béatrice Mukankusi’s face radiates with relief and a sense achievement as she tells her story. It starts in the dense forests of eastern Democratic Republic of Congo (DRC) where Mukankusi, a teenager at the time, was living a desolate life serving as an apprentice nurse for the Democratic Forces for the Liberation of Rwanda (FDLR) rebels.

“In the Congolese forest, I lived like a wild animal with no hope and plans for the future. I was nothing,” recalls Mukankusi grimly. When she was barely 18 years old, she was captured by the Rwanda Defense Forces while fighting alongside rebel infiltrators in the northern part of the country. It was a blessing in disguise.

She soon found herself in the Mutobo Demobilization Center, where she went through a pre-discharge reorientation program run by the World Bank-funded Demobilization and Reintegration Project (RDRP).  There, Mukankusi was equipped with basic skills in entrepreneurship and resource management which she says, restored her confidence and fueled her determination to exploit her capabilities.

“I have proved to myself that I am capable of creating a better life for myself and my family. I want to build on this self-discovery and on what I have achieved so far, to move to a higher level and one day become an employer, and I am sure I will get there.” 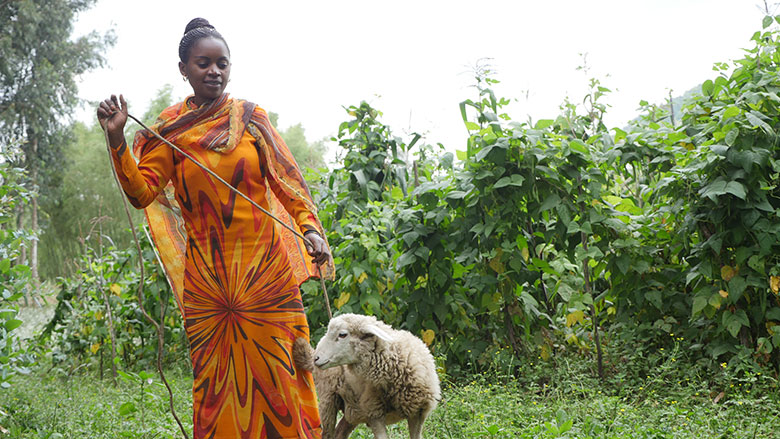 Discharged in 2001, she invested her reintegration grant provided by the project into a second-hand clothing business that she started up in Gisenyi, in Rwanda’s Western Province. A year later she married her husband Pascal Karorero, also a demobilized and reintegrated former soldier in the Rwandan Armed Forces (FAR). The young family relocated to her home district of Musanze, where she continued her second-hand clothing business but also, with RDRP’s support, started pig and sheep farming to supplement her income. “Things went very well. I was able to buy a plot of land and build our first house while carrying on with my businesses” says Mukankusi with a contented smile.

She is also a member of a cooperative of demobilized ex-combatants in Musanze, for which she is now working for as a part time security guard. The cooperative is involved in preserving biodiversity by guarding against degradation and poaching in the Volcano National Park. She earns dividends as a member of the cooperative and a salary as its employee: “I have wasted plenty of valuable time trailing behind FDRL rebels in the wilderness, carrying medicines and treating their wounds, I am now making up for the lost time,” exclaims Mukankusi, who is now completing a RFW 600,000 annex for rent to tenants.

“I am a proud and determined mother. I have proved to myself that I am capable of creating a better life for myself and my family. I want to build on this self-discovery and on what I have achieved so far, to move to a higher level and one day become an employer. I am sure I will get there,” concludes the 34 year-old with palpable determination. Driven by a fire within, her will and might match only that of the volcanoes at the foot of which she now carries out her new life.

The RDRP supports the Government of Rwanda’s efforts to demobilize members of armed groups of Rwandan origin and the Rwandan defense forces, and provides socioeconomic reintegration support to such members following their demobilization with a particular focus on female, child, and disabled ex-combatants. From January 1, 2009 to August 31, 2016, a total of 8,476 ex-combatants have been demobilized, including 4,000 from the Rwanda Defense Forces (RDF) and 4,476 from different armed groups.