For the second year in a row, the World Bank office in Burkina Faso organized a blog contest entitled “Writing for Development”.  The contest, which launched nationwide in May 2016, invited university, high school, and middle school students to express their views on development issues in their country.  It was also an opportunity for the World Bank to renew its commitment to the young people of Burkina Faso and listen to their ideas and aspirations.

Among the 500 entries, the jury nominated 40 finalists.  Of these finalists, the best three in each category received special prizes, while the remaining finalists received consolation prizes.  The overall first prize of $1,000 was awarded to the winner of the university category, and the same amount was also awarded to the winner of the high school and middle school category.  The latter, which was not included in the first edition of the contest, was added specifically to enable the World Bank to connect with the under-18 age group.  Contest applicants were asked to respond to one of two themes, depending on their category: “youth employment: challenges and solutions” in the case of university students, or “social networks: advantages and disadvantages” for high school and middles school students.

At the awards ceremony held on June 24, 2016, the jury, chaired by Dr. Dramane Konaté, president of the writers’ association (Société des auteurs, des gens de l’écrit et du savoir: SAGES) of Burkina Faso, awarded the first prize in the university category to Wougo Kaboré, a 23-year-old student attending the Burkina Institute for Applied Arts and Crafts (Institut Burkinabe des Arts et Métiers or IBAM).  This young Burkinabe dazzled the jury with his analysis, which focused on agriculture and the potential of this sector to create more jobs, specifically through creating small production units managed by youth.

“I also proposed creating training modules in universities on the agricultural sector and on managerial techniques,” Kaboré explained at the ceremony.  “It is really important to refocus the education system on the skills required by businesses and on the sectors where there are the most job opportunities.”

In the high school and middle school category, the first prize went to Sié Rachid Boris Coulibaly, a senior at Moukassa High School in Koudougou.  In Coulibaly’s view, “social networks have become the youth’s tool of choice.  They allow them to discuss political issues in various forums and learn about the latest cultural trends around the world.”  He warns, however, that these same social networks present a number of disadvantages.  “Young people may become victims of cyber-bullying or cyber-crime,” he added.

In the words of Dr. Dramane Konaté, “the scope and quality of the entries are a reflection of the youth’s impressive analytic capacities (…) their maturity leads to highly relevant suggestions, both for bringing down unemployment and significantly reducing cyber-addiction.”

At a vibrant evening event, the World Bank team highlighted the merits of young people, emphasizing the importance of their participation in the development of their country.  In total, prizes were awarded to six individuals in two categories, and the winner of each category received the prize money of $1,000 from the hands of Cheick Fantamady Kanté, World Bank Country Manager in Burkina Faso.

“I would like to salute the courage of the applicants who candidly shared their ideas and their visions on issues such as employment and social networks.  We were delighted by this level of commitment on the part of young people to discuss matters on which their voices are not often heard,” Kanté concluded. 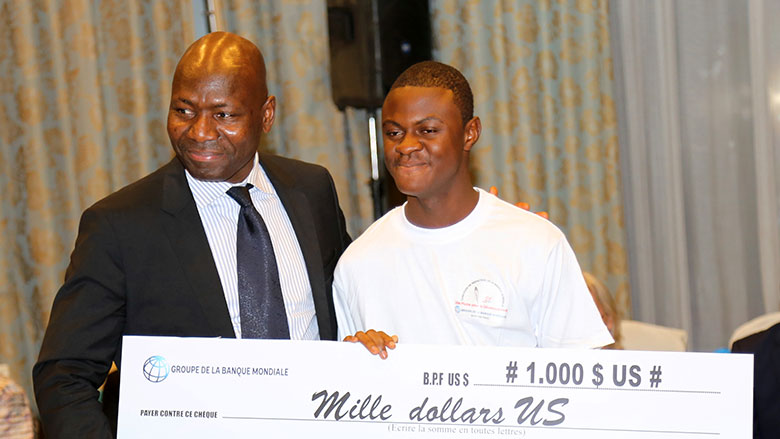 Freshly graduated from high school, Sié Rachid Boris Coulibaly, an honors graduate, won the high school and middle school category of the contest “Writing for Development”, organized by the World Bank office in Burkina Faso.  He took a few questions during the awards ceremony.

How did you learn about the writing contest?

Sié Rachid Boris Coulibaly: I received the information while watching the news on Burkina’s national television channel,Radiodiffusion Télévision du Burkina.  Then I did some research on the internet to get more information on the rules and requirements of the contest, and when I saw that my profile met the critieria, I decided to apply.

And you took first place in the high school and middle school category.  What does this recognition mean to you?

Sié Rachid Boris Coulibaly: This award is like a victory for me.  The contest gave me a way to express my ideas to the world, and being chosen as one of the top applicants was a thrill!

For future contests, what advice would you give the Bank to improve the dissemination of information on the contest?

Sié Rachid Boris Coulibaly: First of all, I want to thank the World Bank for this initiative which allows young people to express their views on current topics.  For the next contest, I would propose that it collaborate more closely with the regional departments of secondary education to spread the word about the contest to potential applicants. 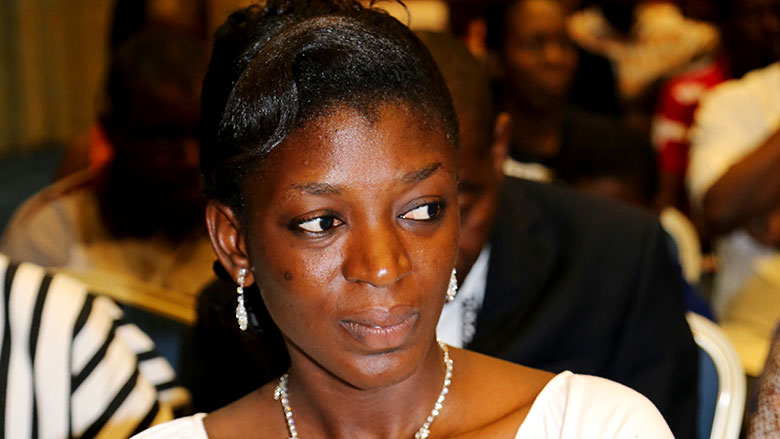 Three questions for Samiratou Zinaba, winner of the first Writing for Development contest

One year after winning the Writing for Development contest, 22-year-old Samiratou Zinaba, with a master’s degree in economics, discusses her path and the support that this award provided to her.

In June 2015, you won the Writing for Development contest organized by the World Bank.  What did this award do for you concretely?

Samiratou Zinaba: This award enabled me to have an internship contract at the Institut de Recherche pour le Développement (IRD), where I joined the “Peace through development” team as a project monitoring and evaluation officer.  This was an enriching experience that gave me the opportunity to taste the realities of professional life.

What would you say to those who might hesitate to participate in this contest?

Samiratou Zinaba: I would say to those who still have doubts about the writing contest to get over their concerns.  I invite them to participate because this prize is something concrete that enables young people to express their views on the challenges facing the country and propose solutions to improve the situation.

Do you have any advice for the organizer?

Samiratou Zinaba: I commend the World Bank for this initiative.  I hope the Bank will not stop at organizing a simple writing contest.  I call on the Bank to breathe life into the ideas and solutions proposed by the winners.  As for the prizes, the Bank could consider providing scholarships to the winners or even offer internship contracts in its office.