By Nosmot Gbadamosi, for CNN

(CNN) — The sci-fi world has started to take notice of Lagos. The Nigerian city even had a starring role in the newest Captain America movie, sparking the tongue-and-cheek trending hashtag #CaptainAmericaInNigeria. Brooklyn-based Nigerian artist Olalekan Jeyifous has his own futuristic twist on the city. In a series dubbed Shanty Megastructures, he’s recreated a Lagos in 2050 where massive tin shacks tower over the city’s luxury real estate areas. 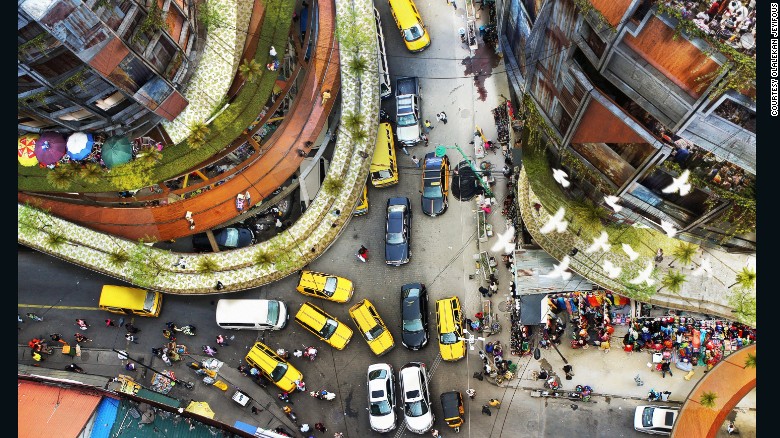 Jeyifous used a series of digital software to create his 3D visuals which he then later rendered into digital photographs. He says it’s to represent the country’s marginalized poor.

“Nigeria isn’t depicted as much as it should be in sci-fi narratives,” he says. “I wanted to create something interesting that provides an alternative vision of the future.”

“It is one of the fastest growing mega cities, and an enormously fascinating and fertile ground for architects, urban planners and anyone else intrigued by its potential,” says Jeyifous.

One of the locations the artist pays attention to in these dystopian imaginings is the city’s famous Makoko river slum, home to informal shacks built on stilts. Residents have been living under threat of constant eviction since 2012, when Lagos authorities undertook efforts to modernize the city’s infrastructure. 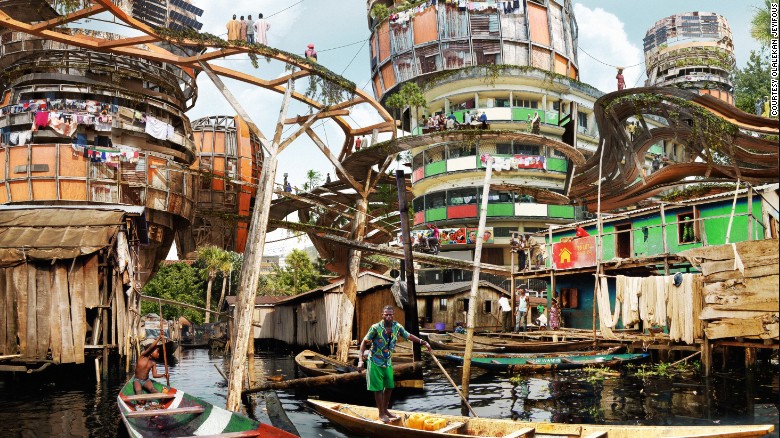 Many of its residents feel those efforts are to make way for luxury waterfront properties, similar to Bar Beach, a prime real estate site currently under construction just off Victoria Island in Lagos State.

It is estimated around 3,000 people were made homeless when demolition workers knocked down targeted structures in 2012.

Gated communities created for middle- and high-income earners are popping up in the city often excluding its previous poorer residents.

“A primary take away (from the visuals) is that development should include the disenfranchised and not just the rich or middle class.” 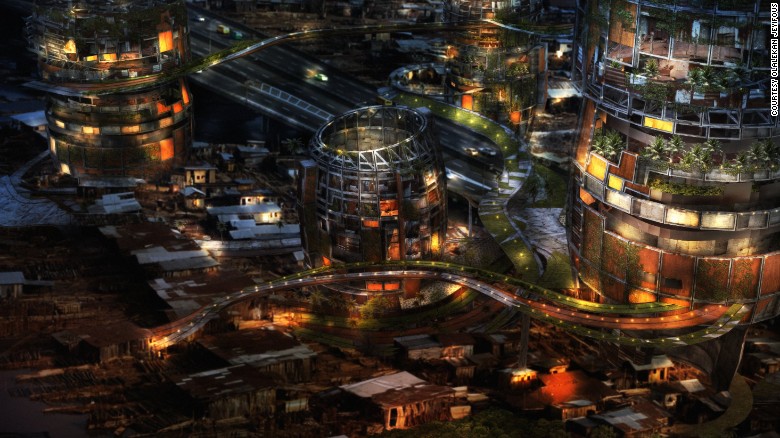 While the works have been well received, some have taken their appreciation just a little bit too far.

“People will occasionally be inclined to confuse architecturally inspired artworks that make a social or political commentary with real-life, solutions-based design projects.”

“When people believe that the project is more of a real world solution,” says Jeyifous, “they start to make critiques on the engineering feasibility.”

Although this can make for some “very interesting feedback,” Jeyifous notes, this isn’t the prototype for a Lagos new build.

Olalekan Jeyifous is exhibiting at London’s 50Golborne in September 2016, and San Francisco’s Museum of the African Diaspora, in October 2016.