When Esther Mbabazi was 5, she looked up and watched an aeroplane cut across the sky. She thought to herself, “I want to be the one flying that plane.”

The fact that there were no female pilots in her native Rwanda—and never had been before— didn’t occur to her.

“You know what? I’m going to fly,” she said, “and that’s what motivated me my entire life, that idea I had as a young child.” 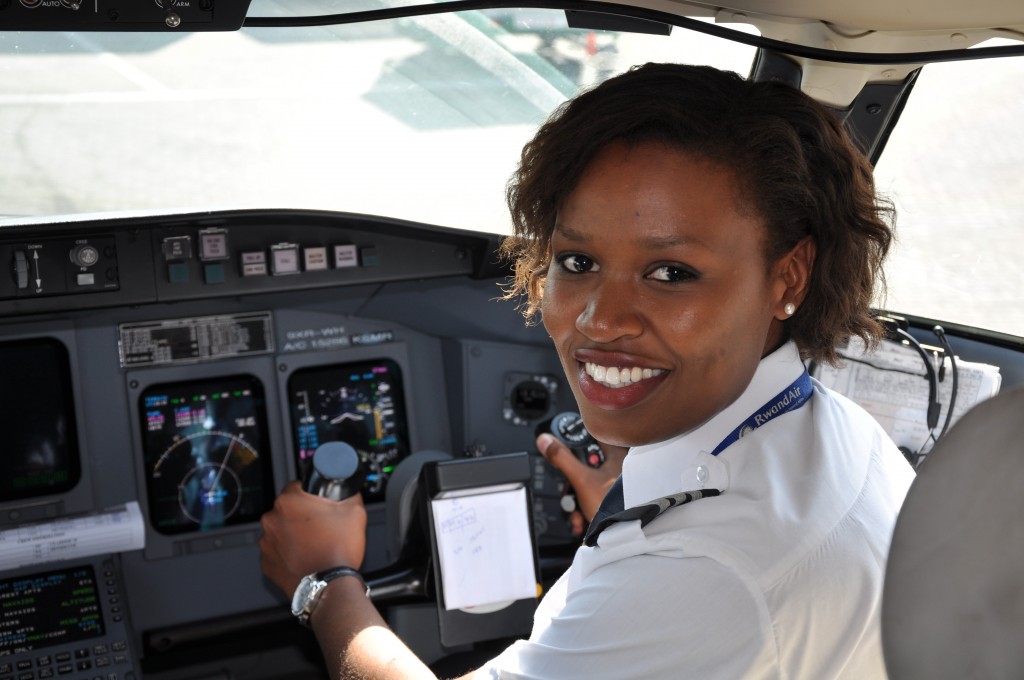 At 24, Esther became the first female commercial pilot in Rwanda. It shocked a lot of people because her father died in a plane crash when she was a young girl. But Esther refused to be deterred from her dream.

“I love the adventure,” she says. “Every day is different. I would wake up today and even though I’m going to the same destination I was going to yesterday, something is going to be different. That’s what I enjoy about my job: Every day brings its own uniqueness.”

Esther refuses to believe that being a woman negatively affects her career. “It’s a modern world. I have no fear of heights and I like machinery,” she says, refusing to bow to the stereotypes about women that she’s come across.

But she has experienced some negative response. One day, a male passenger stepped onto the plane. When he saw Esther, he said that if she was the one flying, he wouldn’t stay on the plane.

“I feel like even though there’s just that one person, there’s a thousand more that are excited and are happy about where the world is going for women,” she says.

Esther’s achievement is remarkable, but being a woman in a traditionally male-dominated field isn’t an anomaly in Rwanda.

“Of course, I’m sure everyone knows we have the highest number of women in the parliament in the world,” Esther says, citing Rwanda’s remarkable achievement in gender parity. Half of Rwanda’s Supreme Court is also women, and an equal number of boys and girls attend school in the country.

“You know a lot of leadership roles are taken by women in Rwanda,” Esther says. “I think Rwanda is doing really a good job training women and supporting women in all aspects.”

Today, she gets dozens of letters from young girls who want to be a pilot someday. “Everything starts with a dream,” she says, and encourages those young girls to study math and ignore the naysayers. She also asks them to think about what will come between them and their dream—and then she encourages them to completely ignore it.

“If they are girls, people will tell them ‘Oh, if you’re a pilot, it will be hard for you to have a family, to find a husband’,” Esther says. “But those opinions don’t really matter.”

“Overall, it’s a job that requires passion. Whether you’re a man or a woman, you just have to have passion.”