The future alternative to the traditional electric utility may emerge first in Tanzania.

The East African nation has developed the best system of regulating and spurring off-grid power systems anywhere in the world, according to the annual Climatescope study into energy investment trends in developing nations by Bloomberg New Energy Finance.

With more than 620 million people living without access to electricity, Africa is becoming a working laboratory for financial and technical innovations that can bring power to the masses without erecting centralized power plants and costly distribution grids. The continent already has attracted $450 million for off-grid power systems fed by renewables such as wind and solar, BNEF estimates.

“Tanzania has been a pioneer for the continent,” said Nico Tyabji, an analyst at the London-based research arm of Bloomberg LP. “Its smart policy framework for small power projects and mini-grids built up a significant project pipeline.” 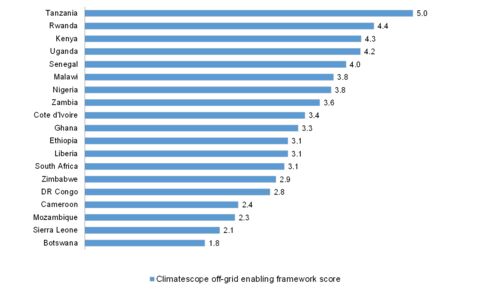 The nation trumped Kenya, Uganda and 16 other Sub-Saharan countries in the Climatescope rankings for a second consecutive year. BNEF analysts evaluated the markets based on energy policy and regulations, electrification rates, project developers and private investment.

An off-grid system is a small electricity network that can range from solar-powered lanterns to rooftop photovoltaic panels to miniature grids. Power is generated and distributed independent of the country’s national grid. The technologies have been touted as an answer for lowering energy poverty, particularly in rural areas.

Tanzania introduced a new regulatory framework at the end of last year that was implemented in March. It has a small power producer program that allocates feed-in tariffs in a tender process.

“Tanzania’s framework is the most developed and it has a transparent regulator that actually has a bit of power,” said Michael Gratwicke, head of Rift Valley Corp.’s energy platform. “The downside to working in the country is that the state utility is a bit uncooperative as our prices are lower than theirs.”

Rift Valley is building two off-grid hydroelectric projects in Tanzania with 1.5 and 3 megawatts of capacity, respectively. It has a pipeline with 15 more hydro plants and 2.5 megawatts of wind energy, Gratwicke said by phone from Zimbabwe where the company is based.

Tanzania-based developers of residential solar systems such as Off-Grid Electric and Mobisol have installed tens of thousands of their rooftop technologies. Their photovoltaic panels and batteries can power lights, a small refrigerator, a television set or radio and also charge mobile phones. Off-Grid Electric aims to electrify 1 million homes in the next three years.