By Cassie Werber for Quartz [qz.com]

When it comes to equality between men and women, the Nordic countries have long been celebrated as hands-down winners. Women in countries like Iceland, Norway, and Sweden are healthier, more educated, and better represented in government and at the top of companies in comparison with men—sometimes with the help of quota systems—than just about anywhere in the world. But this year they’re joined at the top by a new entrant. Rwanda has stormed into the top 10 countries assessed in the World Economic Forum’s annual report on global gender gaps.

The WEF measures the gender gap using a wide range of factors in economics, health, education, and politics, and then allocates a score. Overall, at current rates it would take another 118 years before global gender equality is fully achieved, the WEF said.

These are the top 10 countries ranked by gender equality: 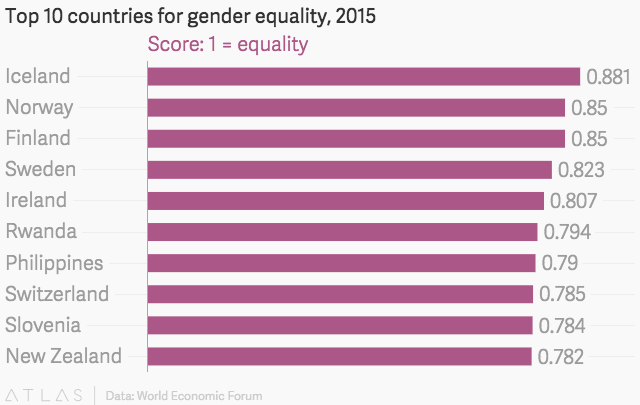 Rwanda is an interesting case. It is one of only two countries in the world that have more women in parliament than men (the other is Bolivia). It is also the best-performing country in the world on one major indicator of gender equality: Perceived wage equality for similar work, a qualitative assessment based on surveys of thousands of executives worldwide.

The US, meanwhile, scored much less well than in previous years. Changes in Congress altered the makeup of the country’s legislative branch, meaning fewer women representatives at a national level. The overall outcome was an eight-place drop, to 28th from 20th last year. This left the US far outside the top 20, let alone the top 10.

Rwanda is the only African country in the top 10, but it is joined in the top 20 by Namibia at 16th and South Africa at 17th. As a continent, Africa also has some of the very worst-performing countries in the world (the Middle East is also strongly represented on that end of the spectrum). Chad and Mali are in the bottom 10 and Angola, Côte d’Ivoire, Benin, Guinea, and several North African countries are are all in the bottom 20: 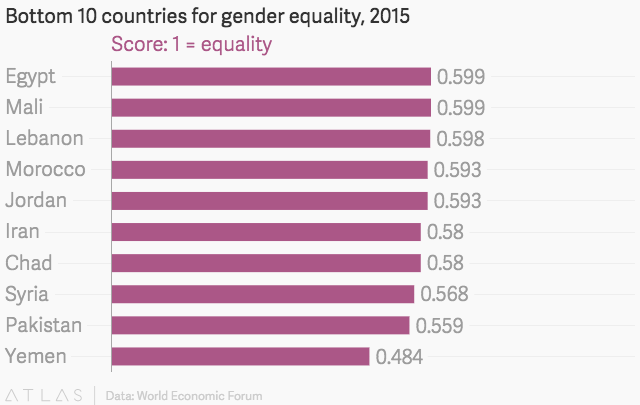 The sub-Saharan African countries stuck near the bottom of the index perform particularly poorly on getting women into education and helping them stay there, and, consequently, on literacy rates. Health and survival rates were also particularly low in these countries.