by Renuka Methil (Ms. Methil is the editor of Forbes Woman Africa)

Bethlehem Tilahun Alemu is a tireless foot soldier taking Ethiopian entrepreneurship to the world. She is building a $20-million shoe factory in Addis Ababa and is also soon launching a coffee brand.

The Adams Pavilion, a dusty shopping center selling aromatic oils, kitschy cushions and costumes in the noisy Sar Bet area of Addis Ababa, is hardly the setting for a flagship shop selling high-value branded shoes to 16 stores around the world, from Singapore to Switzerland to Silicon Valley.

Yet, that is where it all started – from a single outlet in Ethiopia.

Above the din of traffic outside, the diminutive Bethlehem Tilahun Alemu, in jeans, a white T-shirt and blue blazer, her hair coiffed into a careless bun, is retelling the genesis of her hugely successful business, soleRebels, 10 years ago.

To her customers across the world – ranging from techies in San Jose to gym nuts in Taiwan – she has broken every popular perception of Ethiopia. Instead of handouts going into the country, here was handcrafted footwear – with soles made of recycled tires – going out of it to stores across the globe.

We are sipping espressos – from the local Starbucks-inspired café below her shop – and Alemu mentions that her humble middle class background taught her to be industrious. Her mother helped as a cook in the kitchen of a local hospital, while her father worked hard as an electrician in the same hospital to raise his daughter and two sons.

“Growing up, I saw people trying to make it every day at the hospital. Leprosy patients getting treatment would also work. What I learnt from them is their dedication, how they worked hard and loved life and their culture,” says Alemu.

At home, she had the same rights as her brothers; her parents saw her as no different.

“In college, I wanted to create something authentic at the same time global, supporting the local community. But 10 years ago in Addis Ababa, it was almost impossible to do something like that because of the infrastructure.”

Alemu got married, and at the age of 25, quit her “boring” accountant job in a private company wanting to turn entrepreneur. She had nothing going for her except hope. She wanted to create a brand out of Africa, tapping into the local culture and talent.

“I had to put together a plan and be really brave.” But why shoes?

“I was looking at what people did widely in Ethiopia, and that was scarves, dresses and robes. I wanted to be innovative, and start from scratch.”

Recycled tire didn’t cost anything, and it was not an alien concept. Ethiopia’s rebels had famously fought off the invading forces in ‘barabasso’ sandals made of old tires.

Alemu took this idea and self-financed ($5,000) her dream, starting with five workers in a workshop on her grandmother’s land in the village of Zenabwork.

It took her two years to get it right. Initially, the prototypes weighed six kilos a pair. 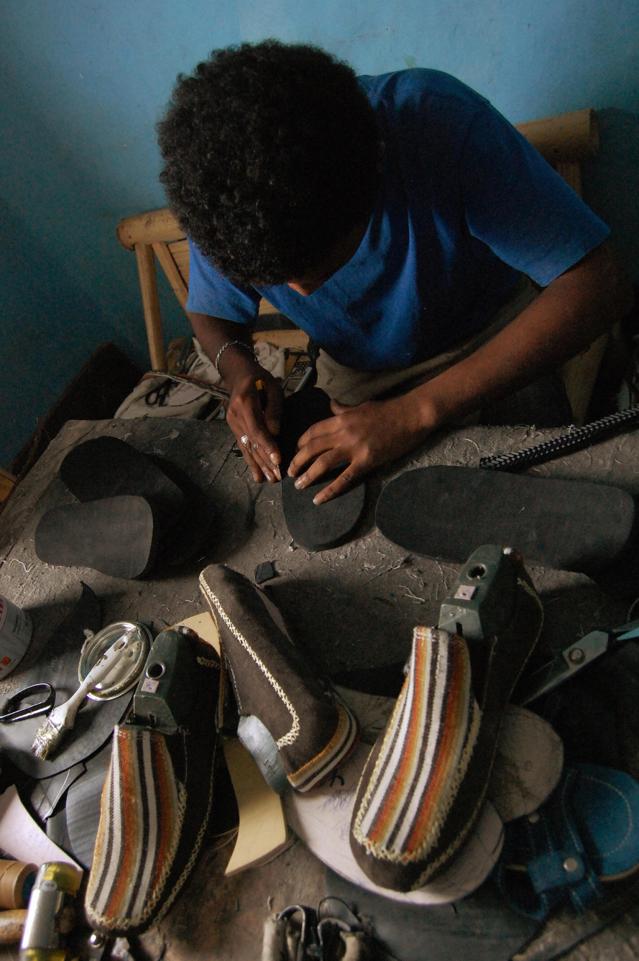 “The shoes were really heavy, as I didn’t know how to cut the tire. They looked really funny. I kept trying and trying to develop the perfect product.”

She knew she had to come up with an artisanal product using local fibers she could sell globally moving up the Africa value chain.

“In my factory, in Yeshideble, we don’t have any machinery. You will find a lot of people sewing. It’s like music. We have a unique way of working with communities, where we have a culture of spinning and making our own clothes at home. These women, when they are old, are not so productive, so we give them jobs. We have 120 women who spin for us, they don’t need to go out, we collect [the goods] from them every week…These are mothers, grandmothers…they have their coffee and spin for soleRebels.” They are also paid more than the industry standard.

She is now building a $20-million state-of-the-art factory, to be completed by the end of the year.

Alemu has standalone stores in Barcelona, Vienna, Zurich, Athens, and is set to open her first shop in Canada. She has 12 stores across Taiwan. Her label is certified by the World Fair Trade Organization.

Her colorful shoes retail from $65 onwards. Earlier this year, Alemu diversified her business to include bespoke leather jackets (available online at about $60), dresses and bags. 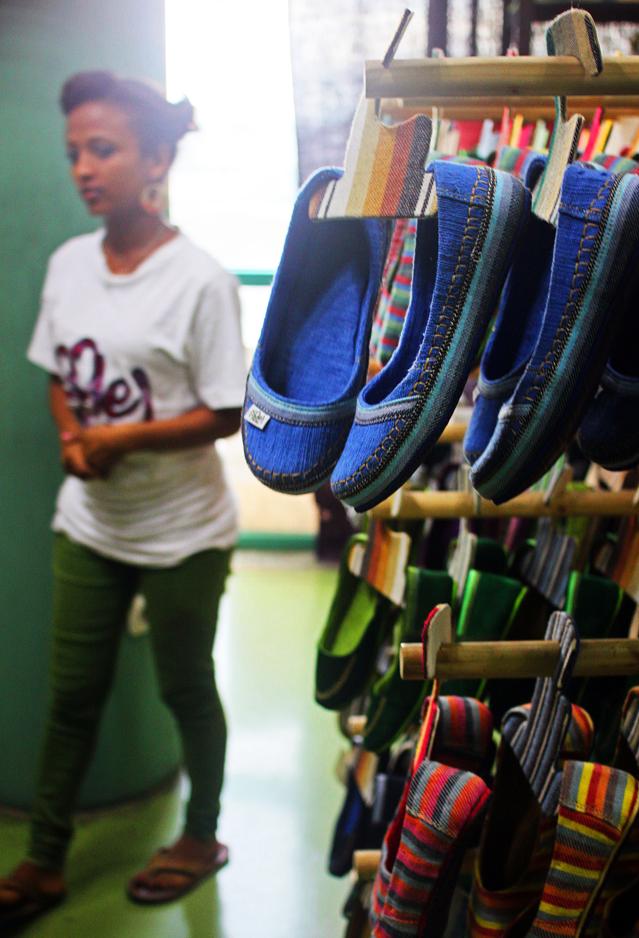 Is the mother of three a billionaire yet? There is slight hesitation, and then a smile.

“Let’s see…The company’s growing but we are always looking at investing our monies somewhere.”

And then she says in one breathless sentence: “It doesn’t matter how much I have. What I want is to create a platform for everybody and they can come and work. And it’s something I love to do. I see it, I invented it, it grew up with me, it’s inside me, it’s my baby.”

Ten years ago, nobody talked about entrepreneurs, says Alemu.

“I was not looked at as an entrepreneur, only as a businesswoman.”

Times have changed. Alemu was recently awarded a PhD (Hons) in commerce from Ethiopia’s Jimma University.

“The government believes in entrepreneurs, and I am really happy we get noticed at the end of the day,” she says.

“One of the things helping me is not to see myself as a woman. When I see myself as a woman, I always fail. We don’t have the confidence, we always say yes, we don’t say no – that’s going to take you down. Whenever I deal with people in offices, I am a business person. I have a goal and no one can stop me. All I think about is my business and my customers.”

If the last decade was this eventful, where does she see herself in the next 10 years?

“I will probably have 500 stores around the world,” says Alemu, ever the optimist set to ensure that with every step, her country moves forward too.

Delightful Food Pop-up, in partnership with Freshforte, brings a Taste of Ghana to Lagos...