(BBC) — Mario Macilau was 14 and living on the streets of Maputo, the capital of Mozambique, when he got his hands on a camera. He taught himself to use it – and 12 years later he was holding a solo exhibition in Lisbon. Here he explains how he snapped his way out of poverty.

As a boy, I dreamed of becoming a journalist. But then I got caught up with day-to-day troubles. When your life is full of worry it is like the future does not exist.

When I was about seven, my father left our home in a township near Maputo and travelled to South Africa to look for work. I was older than my sisters and had to help bring in some money. So I started to take my mother’s biscuits into town to sell in the market.

I got into doing odd jobs in the market – washing people’s cars and helping to carry their bags. Instead of going home, I often slept overnight in the market with my friends. 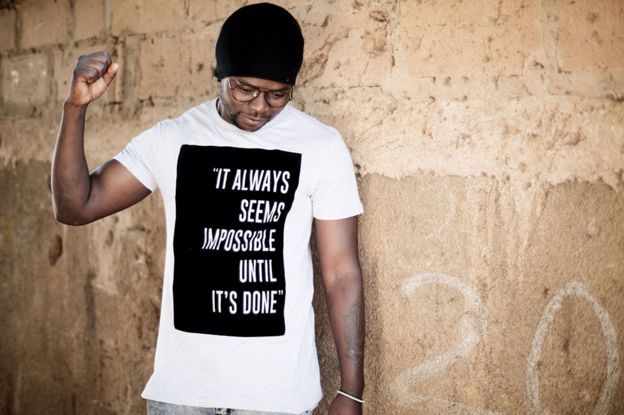 It wasn’t very safe. We had nowhere to keep anything, so we stole from one another. I got into some bad habits – minor criminality, but it was a question of survival. Dog eat dog.

My mother tried several times to send me to school but she just couldn’t afford the fees. But all this time I was learning – I read books, and through volunteering with NGOs I learned English.

When I was about 14, I borrowed a friend’s camera. I started to take photographs of my surroundings, documenting people from the townships as they travelled to the city to sell their things. They were black-and-white photos, which I developed in a darkroom I made in my mother’s house. I was teaching myself how to do things, practising whenever I could, but it was difficult for me to pay for the film and the chemicals.

My favourite photograph was taken near the township where I grew up early one morning. It was of a woman walking into town to sell cassava. She had her back to the camera and it was raining.

That photo is long gone – I didn’t keep any of my early work. That’s because it wasn’t really “work”, just something I did for my own pleasure. I had no thought of making a career in photography.

Then one day in 2007, when I was about 23, a guy I knew brought a camera to me. It was a Nikon FM2, a film camera. He had been given it by the Portuguese family he worked for, but he had no idea how to use it so he thought he would sell it to me. I had no money, but my mother had recently got her first mobile phone, which she had given me because I was the breadwinner. So I gave him that and he gave me the camera.

It was very difficult for me to tell my mother what I’d done. I said that I had been assaulted and that the phone had been taken from me.

Around this time, my friends told me about a way to communicate with people outside the country – it was the fastest communication possible, and it was free. It was the internet.

So we used to go to the library and log on to different chat rooms and networks. And I learned how to create a blog, and I posted my photos online. I started to get positive feedback, and eventually I was invited to take part in exhibitions.

I managed to get on an exchange programme for young people to Vancouver in Canada. While I was there, I went to lots of photo exhibitions, and I taught photography in an elementary school. It was in Canada that I had my first solo exhibition – the standard was not very high, but it was a useful experience.

It was after I returned to Mozambique that I started to really think about turning pro. I picked up some work as a fixer for foreign photographers who were coming to document the changes in my country.

In 2009, I was invited by a parish in Lisbon to come to the city for a solo exhibition. I have since taken part in a group exhibition in the Berardo Collection Museum in that city, and the Saatchi Gallery in London.

I was never intimidated by professionals or by the people I met on the art circuit. I just learned what I could from them. I still take inspiration wherever I find it. It might be a picture by a great photographer or one by someone who is just playing around, a kid who is not going to become a professional.

Nowadays I use a digital Canon camera, but I still shoot on film too. It depends on the project.

My work focuses on isolated groups of people. I have done projects on cement resellers in Mozambique, illegal loggers in Nigeria, and stone miners in Bangladesh. I never know what my next project will be. I just leave my house and something happens, I encounter something that inspires me. A project starts when you see something that you can’t explain.

My latest series, Growing in Darkness, is about street children in Maputo.

If I had done this project when I first became a professional I would have felt guilty, like I was indulging in autobiography. But I was friendly with the street children, they knew me, and when they started to see my work on local TV and in magazines, they complained that I never took pictures of them. They said I was discriminating against them, that I thought they didn’t deserve to be in my pictures.

So one day I went to the street where I thought they lived, and I was surprised when they took me to where they really slept, not on the street at all but in an empty apartment building.

My way of working is all in the research. When I say “research” I mean I am exploring ways of relating to my subjects, how I can approach them and find out who they really are. So to begin with, I don’t take my camera. I need people to feel comfortable with me and I also want to feel comfortable with them. Then after they get used to me, I introduce them to the camera and give them time to get used to that too.

Afterwards, if I can, I give the people in my projects photos I have taken of them. I order exhibition-quality prints for them, and they can see the difference in quality right away. Sometimes they put the photos in a special place.

I’m not a fashion photographer, my goal is not to make people look glamorous. Even so, nobody ever complains about the way they look. The reason for that, I think, is that I am trying to bring out the dignity and the identity of these people, because this identity has been hidden. I deal with very strong subjects, so my task is to use light and composition to provide balance.

Take the street children, for example. They might be wearing dirty T-shirts, but for them, in the photograph, they are clean. That’s because the light is beautiful, their expression is beautiful and no-one sees the T-shirt.

Other people look at street kids and just see poverty but their lives have much more meaning than just begging and sleeping on the streets. They eat, they watch movies and they make toys. In their free time they play.

They’re humans who have adapted themselves to their circumstances. I believe that in life we have to learn how to adapt and how to see things differently.

I don’t look at my past and wish that it had been different. My experiences taught me how to fight for what I believe in and how to be independent. They are what made me who I am today.

I occasionally see the boys I used to hang out with when I worked in the market. But I don’t speak to them. We have done different things with our lives. Everything has changed.

I am definitely going to stay in Mozambique and build my studio here, in Maputo. I live with my mother in the township , but I rent another apartment too, where I can go to be alone and where friends can stay when they visit me.

It took my family a long time to understand that I can make money by just taking photos. It was something that just didn’t make any sense to them. Even now, my mother doesn’t really get it, but it’s OK, she accepts it as my choice.

I have tried to make up for selling her mobile phone years ago. Every time I go abroad I bring her back another phone. She gives some to my sisters and cousins, and she keeps some for herself.

Mario Macilau spoke to Outlook on the BBC World Service. You can listen to the programme on iPlayer or get the Outlook podcast. Production by William Kremer.